With cargo cycling in London taking off in a big way, it's wonderful to see local companies collaborating to build solutions to the city's traffic and congestion problems. The ability for Deliveroo to get hot takeaway orders to their customers quickly is paramount, so it's not surprising that this disruptive start-up is keen to seek out the tools that make it all possible.


All in all, it's a great looking cargo bike solution for the UK and even better it's coming from a London based cargo bike builder, Porterlight. More details about the bike here and the normal Bringley cargo bike model here.

How cargo bikes are taking off in London and the UK

London is a city in the middle of a cycling revolution. At the beginning of 2013 the mayor pledged over £900 million to be spent on new infrastructure and campaigns aimed at getting more of the city's residents and visitors on their bikes.

Since then, new Cycle Superhighways, shared bike schemes, and traffic calming measures across the city have led to a massive increase in the number of people making journeys by bike. One effect this has had, is that more people are using cargo bicycles as a way of completing trips when they need to move larger cargo.

Just like many European cities, London is getting switched on to the world of cargo bicycles, and the result is that innovative manufacturers are designing cargo bikes aimed at the UK market specifically.

Enter Bringley, by Porterlight Bicycles. At only 40cm longer than a normal bicycle, Bringley was designed by UK bike builder Lawrence Brand as a way of making cargo bikes accessible for people who live in apartments, or don't have space to store a large traditional cargo bicycle. The compact length means that the bike can fit in a normal domestic lift when on it's back wheel.


Each Bringley bike is built by hand in London on a custom order basis. This makes it ideal for parents looking to move children around by bicycle, and especially companies who need a custom branded delivery, or marketing cargo bike. Porterlight offers a complete branding service for their bikes which means customer can receive a cargo bike designed especially for them.

One such customer is East London Liquor Company who now deliver their premium spirits to customers and bars around their London distillery by cargo bike.

As well as company bikes, Porterlight also produces family bikes equipped with two ultra-safe BoBike Dutch child seats on the deck. These mean parents can safely and easily cycle around London with their children on the school run, to the local park, or for a countryside outing.

Recently Porterlight has gained recognition of their design work at an eight month cycling exhibition curated by The Design Museum. The Cycle Revolution exhibition features Porterlight founder Lawrence Brand, and the story of his 5,000km test ride for the prototype cargo bike from Romania to Kazakhstan.
As more and more Londoners, and people across the UK, look to cycling as a way of completing more and more journeys, cargo bicycles look set to become a common sight on our streets. From companies doing deliveries, to families on the school run, or people getting the weekly shop home, cargo bikes like Bringley offer a great way to get around London's parks, cycle lanes, and winding streets.

Changing the pace from the normal posts here, I thought I'd share one of my new projects with one of my oldest. I started Bicycle Safari as a way of sharing my interest in cool and unusual bicycles I spotted so I wouldn't have to bore the people I was with at the time by going on about them.

Bicycles have always been a big part of my life, and have been a primary means of transport for most of my time as an adult. They've taken me to the shops, to bars, to university, and they've also taken me around a good chunk of the world. My total touring distance now stands at 12,000km with an almost unbroken line of cycling from Bath, UK, to the eastern most border of Kazakhstan.

My most recent touring trip, a 5,000km three month epic from Romania to that Chinese border, was extra special for me though as for the first time, I was riding my own bicycle. I don't mean I'd ridden my other tours on a borrowed bike, but for this trip I had physically made my first frame and bike.

Let me introduce you to Bringley, well, first the prototype.

Despite carrying all my camping and touring gear for three months, the prototype cargo bike held up perfectly. Starting out on the smooth tarmac on Turkey's Black Sea coast, and ending up bouncing along unsurfaced back roads in rural Kyrgyzstan. My confidence in the frame grew as the kilometers went by, but I also learned a lot about how a cargo bicycle should work and perform.

Having completed my trip, I flew back to London and started revising my design for this custom cargo bike further. Strengthening some pieces, smoothing out bumps, adding brackets, and getting those angles just right.

After a year in my London workshop, out from a pile of 4130 chromoly tubes emerged.... Porterlight Bicycles and from the new company... Bringley.


A compact cargo bike designed for modern urban living. It's short enough to fit in a domestic lift, and be stored in an apartment, but it's long enough to carry your day-to-day belongings. It can take children to school, the dog to the park, and your weekly food shop home again.

A cargo bike in London makes so much sense. London is a compact city, meaning that the idea of storing your cargo bike outside just doesn't work for most people. By fitting into a lift, and only weighing 18.8kg, Bringley is able to get up to people's flats and is happy living in the hallway, or tucked behind a sofa. Each bike is custom made, so you can use the online bicycle configurator to build your design and make it fit your life.

It's been a long journey, also to Kazakhstan, but mostly since I started the Bicycle Safari to share my love of bikes. Five years later I find myself in London, and sharing my love of bicycles in a totally new way. I hope you like it just the same.
Posted by Lawrence at 10:48 1 comment:

The Viscount is head of the badges.

So after an epic break in posting, here's a little something to keep the gears spinning, the pedals turning and all moving parts well greased. I only keep this blog for fun and to share the cool stuff, so when my work load goes crazy, I don't want it to become another chore.
But here's a Viscount head badge!

Make your own bike light 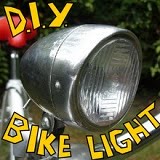 Use the Bike Safari guide to help you convert an old bike lamp into a modern LED bike light. 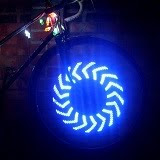 Read about how a cheap POV wheel spoke light holds up.

Get some bicycle tube wallpaper

The Bicycle Safari travels the world to bring you glimpses of the life of the bike on the street. Currently The Safari is in Nottingham, bringing you all the great vintage rust buckets, the strange modifications and the beautiful old bikes that litter the streets. With a liberal dose of vintage bicycle logos and retro bike graphics too, we hope you enjoy the show.

The Bicycle Safari is in: